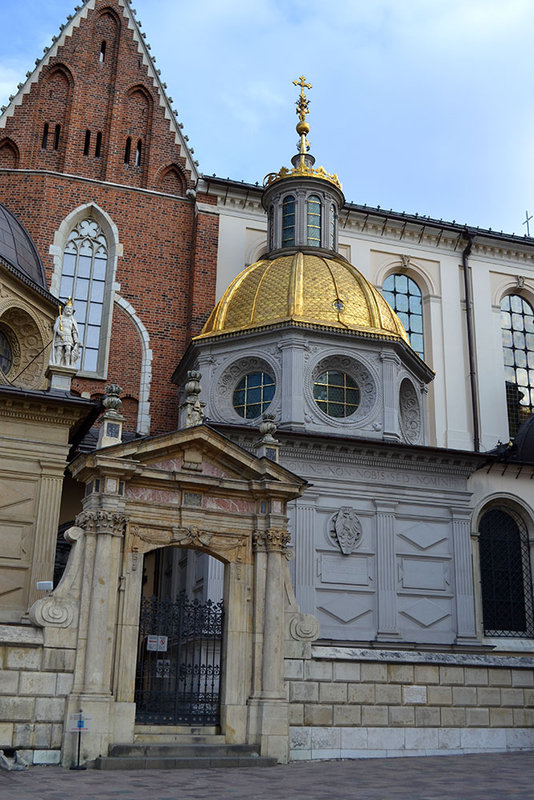 King Sigismund I erected this chapel after the death of his first wife, Barbara Szapolyai/Zápolya. Their marriage connected the Jagiellon and the Szapolyai/Zápolya families. Barbara’s father, Stefan Zápolya, was the leader of the Hungarian National Party and an outspoken enemy of the Habsburgs.

Bartolomeo Berrecci was commissioned with the construction of the chapel, which was richly embellished and the first building in Poland built entirely in the Florentine Renaissance style. The first designs were delivered in 1517, and the chapel was erected between 1519 and 1531. In 1533, the chapel was consecrated and Barbara Zápolya was reburied there.

Built over a quadrangular plan, the chapel is surmounted by a cupola. Painted triumphal arches decorate its interior walls. In contrast to its relatively sober façade, the interior decorations are elaborate. This semi-private chapel was separated from the cathedral by a grill.

A number of artists and artisans assisted Berrecci with his work on the chapel, including Antonio da Fiesole, Niccolo Castiglione, Filippo di Bartolomeo da Fiesole, Bernardino Zanobi de Gianotis, Giovanni Cini, Giovanni Soli and Giammarria, and Padovano. That so many Italian artists were employed confirms that the decorative motifs are of Italian or antique origin. This situation differs from than of the winged altarpiece on the chapel’s eastern wall, which was commissioned by Sigismund the Old in Nuremberg and was made after a design by Hans Dürer. The chapel eventually served as the mausoleum of the last Jagiellons; it houses the tombs of Sigismund the Old, Sigismund II August, and Queen Anna Jagiello. Berrecci himself designed and produced the tomb of Sigismund the Old, who is depicted as though waking from a deep sleep. Santi Gucci created the tomb of Sigismund August.

The chapel and its sculptural design served as the model for more than two hundred mausolaea erected in Poland until the eighteenth century. The tombs frequently functioned as the prototype for later tombs of Polish magnates and noblemen. Their influence is also clearly evident in other tombs located inside the Cathedral.
Lidia Gerc