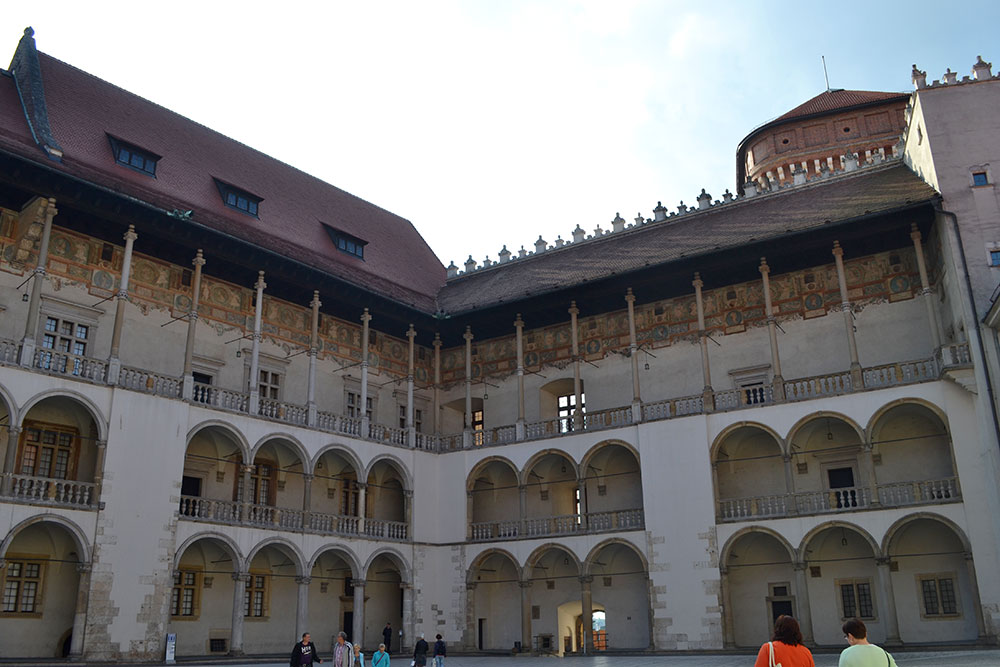 The Royal Castle on the Wawel in Krakow

Construction of the royal residence on the Wawel in Krakow began in the eleventh century. Fires, raids, and repeated occupation by enemy troops resulted in much damage to the residence, so that over the centuries the buildings were rebuilt in different architectural styles. Under Kasimir I the castle was both the seat of the ruler and home to various state institutions (treasury, mint, law courts, etc.). In the fourteenth century, King Władysław I enlarged the castle. Under his son, Kasimir III the Great, it became a Gothic residence. At the turn of the fourteenth century Władysław II Jagiello again enlarged the castle. Later rebuilding programs undertaken by Alexander Jagiello and, in the early sixteenth century, by Sigismund I, gave the structures their Renaissance appearance, which has more-or-less survived until today.

A German architect called Eberhard and the Italian sculptor and architect Francesco Fiorentino were commissioned to complete the building. Later, Benedykt Sandomierski and Bartolomeo Berrecci were tasked with the rebuilding programs. After Berrecci’s death in 1537, Niccolo Castiglione and Matteo Gucci continued the construction work. Wood sculptures by Sebastian Tauerbach and Johann Pfister decorate the interior. Tauerbach and Pfister were also responsible for the wooden ceilings and several of the royal friezes and portraits adorning them. The splendor of the royal apartments and the Great Hall was much enhanced when King Sigismund August purchased a number of Flemish tapestries. At the end of the sixteenth century, Warsaw became the main residence of the rulers of Poland-Lithuania, and the Wawel was turned into a treasury and archive. Today, it is a museum.
Lidia Gerc