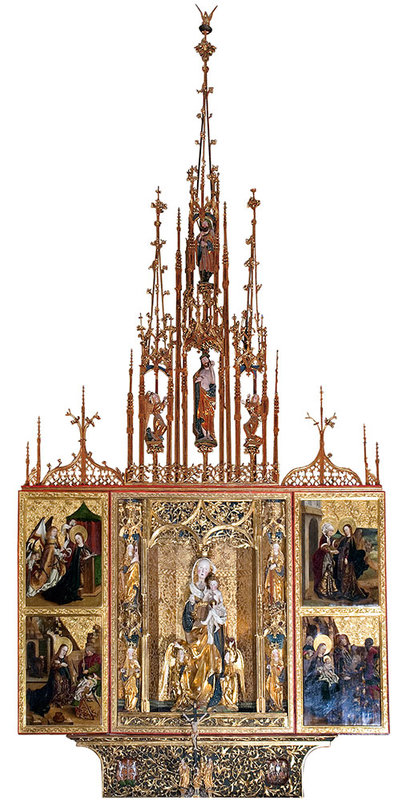 Altar of the Virgin Mary

Located in the northern aisle of the church at Leutschau, this massive altarpiece dedicated to the Virgin Mary comprises sculptures and paintings of the highest quality; it is a masterpiece from the transformative era between the fifteenth and sixteenth centuries. A freestanding statue of Mary forms the centre of the altarpiece; she is accompanied by an angel and flanked by four smaller sculptures of holy women. The altar’s opened wings reveal four painted scenes: the Annunciation, the Visitation, the Nativity, and the Adoration of the Magi. The closed wings feature eight additional scenes from the Life of the Virgin.
The altarpiece commemorates a meeting of four brothers from the Jagiello dynasty, two of them crowned kings, convened at Leutschau in 1494. Details on the altar’s predella confirm that the work was created on this occasion: here one finds the Jagiello coat of arms (with the Polish eagle) alongside the coat of arms of the city of Leutschau. At this time, King Wladislav/Vladislav II of Hungary and Bohemia, King Jan Albrecht of Poland, Duke (later King) Sigmund of Poland, and Prince ( later) Cardinal Friedrich came together to decide the succession and resolve certain crises and contested issues between Poland and Hungary. The 1494 gathering in Leutschau was a typical dynastic meeting with significant repercussions for the rest of Europe, much like the congress of Vienna twenty years later.
Dušan Buran