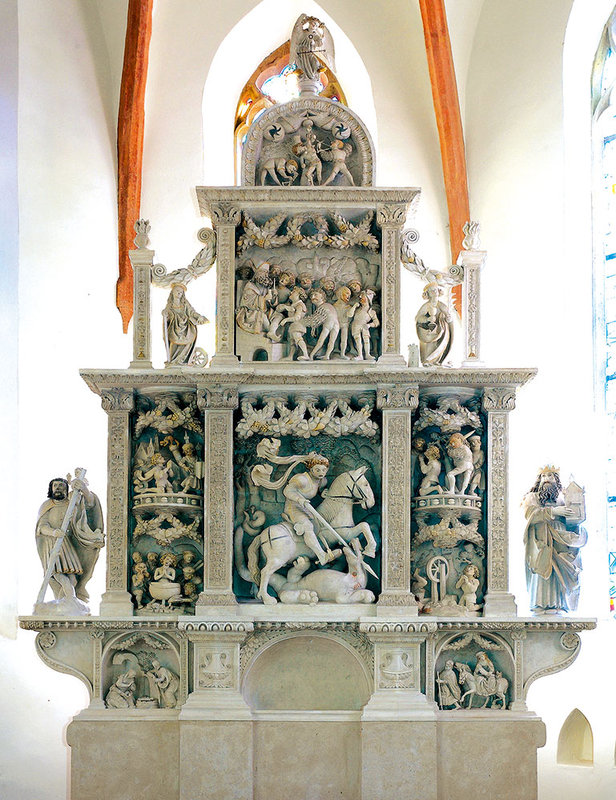 Main Altar of the Church of St. George at (Svätý Jur)

This altar of St. George at Svätý Jur near Bratislava is an important example of the evolution from Gothic to Renaissance art. St. George is depicted before a medieval architecture and landscape executed in relief, which serve as a background to his fight with the dragon. Garlands form a natural canopy above his head.
We find similar decorations on the wings of the altar featuring four scenes from the saint’s life. On the predella, paintings depicting the Birth of Christ and the Flight to Egypt frame what was once a depiction of the Adoration of the Magi. Today the work has been removed from the altarpiece. Framed by the pinnacle surmounting the main altar we see St. George in discussion with a Roman Emperor. At the top of the altarpiece is the Martyrdom of St. Sebastian. Gothic sculptures carved in the round embellish both sides of the altar together with elaborate Renaissance decorations.
The altar was created outside of what is today Slovakia and what was medieval Hungary. It is closely related in style to works produced in and around Vienna: a St. Anne Altarpiece made here in 1512 provides a more appropriate comparison. Recent research indicates that whoever made this altar found inspiration in the regions along the Danube (Salzburg, Passau). Since the Middle Ages, artists working in and around Bratislava had been influenced both by trade along the Danube and by their close proximity to Vienna.
Dušan Buran