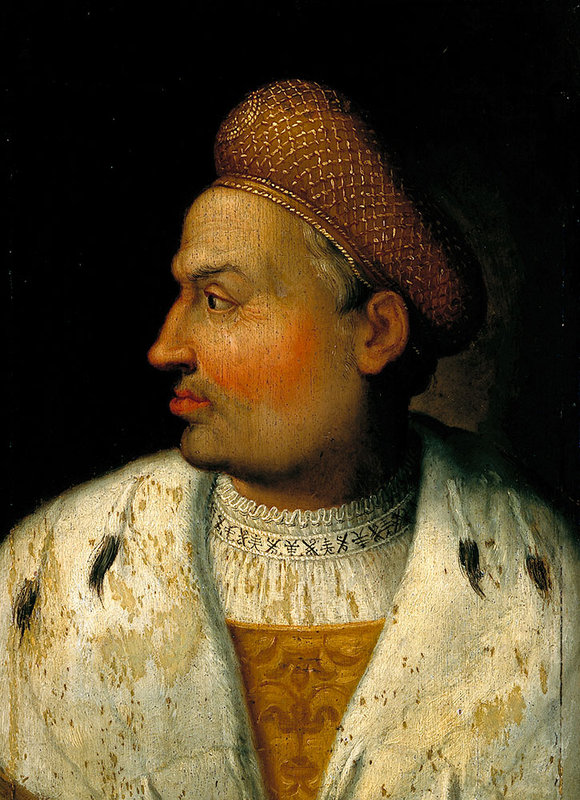 Sigismund I the Old

Hans Süss von Kulmbach (?), Krakow, 1515-1516
Tempera and oil on wood: 24 cm x 18 cm
Muzeum Narodowe w Poznaniu/Nationalmuseum in Posen, MNP MO 2185
Foto: Muzeum Narodowe w Poznaniu/Nationalmuseum in Posen
Sigismund I (1467-1548) was the fifth son of Kasimir Jagiello and Elisabeth of Habsburg. His four older brothers ascended to the thrones of Poland, Lithuania, Bohemia and Hungary, respectively, while his younger brother Friedrich was destined for an ecclesiastic career. Only Sigismund had no prospects: he had neither estates to manage nor a dukedom of his own. After a yearlong struggle he managed to obtain from his brother Vladislav II the duchies of Glogau and Troppau, as well as the governorship of Silesia and Lausitz. The sudden deaths of his brothers Johann I Albrecht (1501) and Alexander I (1506) made it possible for Sigismund to ascend the Polish-Lithuanian throne.In 1512 Sigismund married Barbara Zápolya, the daughter of Stefan Zápolya, a Hungarian magnate and the leader of the Hungarian National Party, who strongly opposed all Habsburg influence in Hungary. Barbara died shortly giving the birth to her second daughter, Anna, in 1515. After her death, Sigismund began work on a mausoleum for his family. The Sigismund Chapel, often called a “pearl of Renaissance architecture north of the Alps,” was designed and built by Italian architects. The profile portrait of Sigismund I from the collection of the National Museum is clearly also informed by Italian portraiture.
Anna Ziemlewska