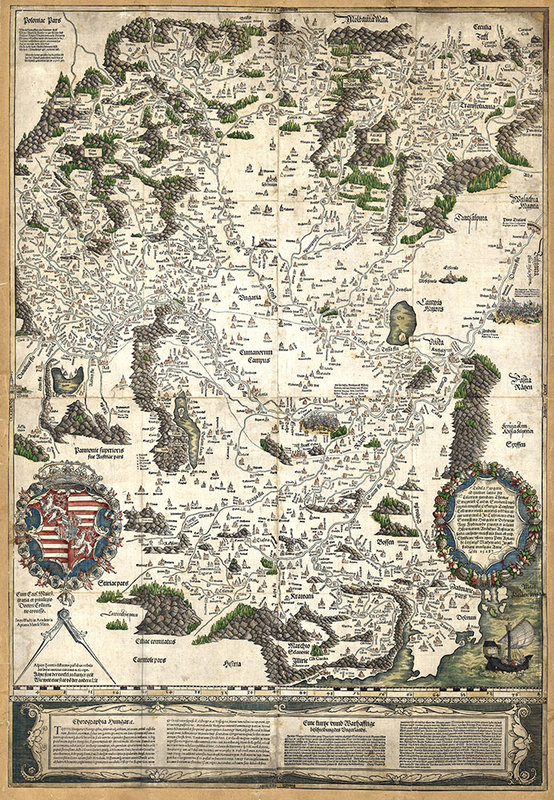 The circumstances surrounding the production of the first detailed map of Hungary are known almost exclusively from its marginal inscription. It states merely that Lazarus, secretary of Cardinal Tamás Bakócz of Esztergom, composed the work. According to a letter of the mathematician Jacob Ziegler he assisted Lazarus in 1514. The Viennese professor Georg Tanstetter (Collimitius) revised and expanded the manuscript map. The famous humanist and Viennese university professor Johannes Spiesshaymer (Cuspianianus) – who frequently visited Hungary on diplomatic missions – published it in Ingolstadt, from the press of Peter Bienewitz (Apianius) in 1528.
The accuracy of defining geographical locations and richness in detail of the map fulfilled the highest standards of the time. In addition to the names of approximately 1,400 settlements in medieval Hungary and Croatia, the map has the names of eighty five bodies of water and seventy-five other toponym (e.g. provinces and mountains). The settlements are indicated by circular signs and additional small figures corresponding to their size and significance. Distances between the settlements can be obtained by measuring the distances between the circular signs using the scale in miles located at the bottom of the map.
The name of the points of the compass are inaccurate on the frame, since the map is turned counter-clockwise by about 45 degrees, probably in order to utilise the paper size better. Besides the detailed topographic representation, the map refers to the important events in the Ottoman-Hungarian wars. Small battle-pieces and inscriptions commemorate Kind Sigismund´s unsuccessful campaign against the castle of Galambóc (Golubac) in 1429 and the tragic battle of Mohács between Louis II and Suleyman I. A dotted line indicates the territory from Pécs to Gyor and Szeged, devastated by the Ottoman army in 1526. The only know one of its kind, the map was transferred from the collection of Count Sándor Apponyi to the National Széchényi Library.