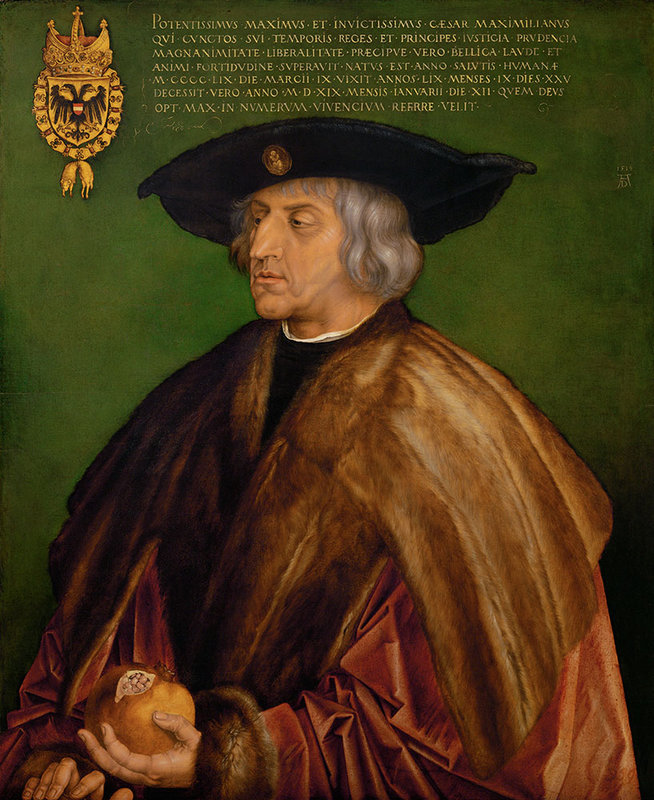 Portrait of Emperor Maximilian I

This famous portrait of Emperor Maximilian I by Dürer (now in Vienna) is based on a charcoal drawing of Maximilian that Dürer had executed at Augsburg in 1518. On this drawing Dürer noted that it was created hoch oben awff / der pfaltz in seinem kleinen stüble (“high-up in the small room in the Palatine castle”), indicating that the portrait had been drawn from life. However, the painting based on it is a posthumous, idealized depiction of the Emperor. Dürer completed it in 1519, immediately after Maximilian’s death. The inscription on the painting records the Emperor’s exact lifespan: 59 years, 9 months and 25 days (“VIXIT ANNOS LIX MENSES IX DIES XXV”). In the painting, the Emperor is represented without any insignia or symbols of power; his coat of arms, the chain of the Order of the Golden Fleece, and his crown are instead placed in the top left corner. The Emperor’s solemn pose conveys not only his authority but also the painting’s overall mood, which is further emphasized by the choice of colors (green, brown, and red). SK