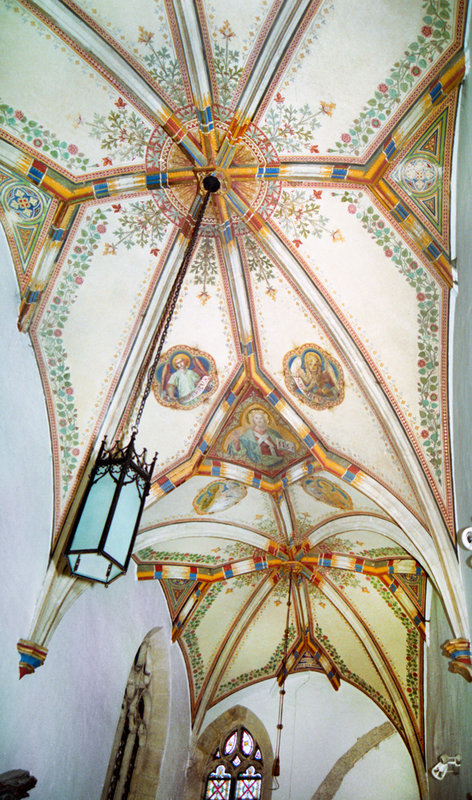 Chapel of St. Anne in the southern narthex, 1515

In 1515 the rebuilding of St. Martin’s Church was completed with the construction of the Chapel of St. Anna on the north side. Built at the same time as the southern narthex, the chapel covered a small northern entrance that had been opened in the first half of the fourteenth century. The addition of chapel and narthex reflect contemporary architectural tastes and the importance of the meeting held at Bratislava. The Chapel of St. Anna is an elongated structure set between the buttresses that support the cathedral. Probably built by the Meixner family from Bratislava/Preßburg at the end of the fifteenth century, the chapel is extraordinary because of its star ribbed vault comprising both triangular and square elements. Three additional buttresses support the chapel. The southern narthex: this addition concluded the medieval phase of St. Martin’s rebuilding program. The Viennese master-architect Anton Pilgrim supervised its completion. Work on the narthex began around 1510 and was executed in the late-Gothic style, which reached the apex of its popularity in this area during the first two decades of the sixteenth century. Its dynamic ribbed vaults make the southern narthex especially interesting. Unsurprisingly, the vaults intersect at the ceiling’s highest point; however, instead of continuing to the walls, they end abruptly in midair. This floating construction challenges the principle of static architecture. The narthex itself is a rectangular room situated between two external buttresses. Additional two-story buttresses located at the corners of the narthex support the structure and allow for concave roofs. The cathedral looks today as it did in 1515. However, the paintings decorating the vault of the Chapel of St. Anna date from the nineteenth century.
Denkmalamt der Slowakei, Bratislava