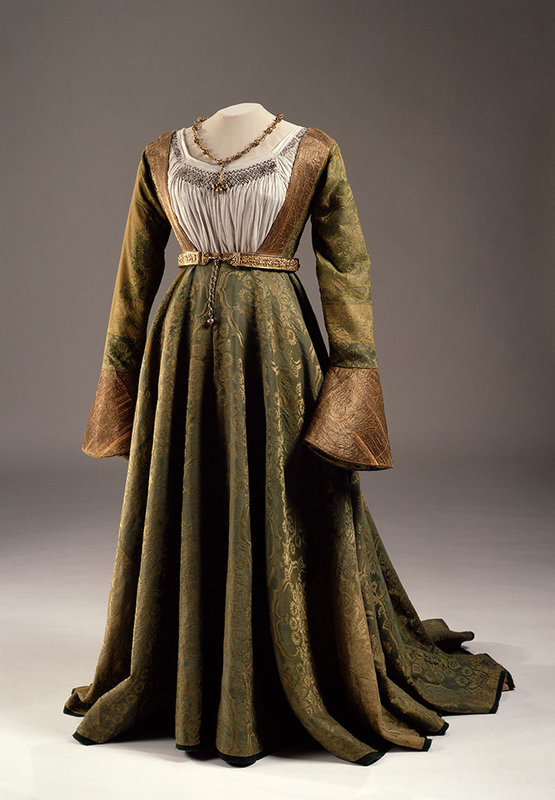 Womans´s dress and Chemise, Donation of Louis II and Queen Mary of Hungary

Woman´s dress
Italy, last quarter of the 15th century
Green silk-damask with lampas decoration lanced with silver-gilt thread, green broadcloth lining, w. of silk: 58 cm, 1. From the waist and the front: 30 cm, on the back: 124 cm, its circumference: 780cm, 1. Of sleeve: 71cm
The dress was bought by the Hungarian National Museum in 1928, together with a man´s garment of a shirt and a mantle, from the pilgrim-church of Mariazell. Budapest, Magyar Nemzeti Múzeum, Textiltár, T. 1928.36
Within the width of the silk, there are overlapping, double-pointed arched rosettes with seven petals that form lines. In the middle of each one there is a pomegranate surrounded by tiny rosettes, a wreath of palmettos and leaves. Above the rosettes, ogival arches are repeated in a zigzag line. From the arches, on both sides, palmettos, rosettes and tiny pomegranates grow. There are pomegranates on the peaks, and the steam are decorated with crowns of fleur-de-lis.
The motif of pomegranates inside rosettes can be seen from the middle of the fifteenth century as a decoration for Italian silks, velvets and damasks.
Similar silks can be seen in other European museums as well (FALKE 1913, 105, 499; SCHULZE 1917, 134, fig. 119). The material of the two chasubles in the Museum Schnütgen in Cologne is nearly an exact parallel of this one. One of them is generally regarded as dating from the second half of the fifteenth century, while the other one is dated to around 1500 (WITTE 1926, Plate 6).
According to recent research, the simpler versions were woven in the middle of the century, while the textiles, like the one of which this dress is made, with rich decoration, were typical of the last quarter of the century (MARKOWSKY 1976, Nr. 46).
The upper part of the dress is tight-fitting, starting wide from the shoulders and with a straight cut in the direction of the slightly raised waistline. Its tight sleeves were narrowed by sewing, and its funnel-sharped, flaring cuffs covered the hand. The dress is decorated with lampas woven of silver-gilt thread around the décolletage and on the cuff. The surface of the golden fabric, decorated with grand morifs, originally had leaves with a red contour. According to an analysis of the dyes, the silk seems to be of German origin (TÌMÀRNÈ 1986, 55-56).
The skirt of the dress is a full circle, made of rims of textiles put next to each other, and, in order to complete the circle, segments were then added. The skirt is trained at the back, which was achieved by slipping the circle cut out for the waist.
Lit.: Mary of Hungary, Budapest 2005, 177-178