August 29th 1526 – the Battle of Moháč, the death of Ludwig and Ferdinand’s race to assume power

Traditionally, the Battle of Moháč is regarded as a Hungarian defeat. For Bohemia it was important because a large number of Bohemian soldiers took part, not only Hungarians, and because their King (Ludwig) was killed. 1526 was also a turning point in Bohemian history, resulting in political and dynastic changes.

The position of Ludwig’s successor in Bohemia was anything but secure. It was a return to the reign of Ladislaus Posthumous in 1453, i.e. a split between the Bohemian and the Moravian nobility. In Prague, Ferdinand was elected King by the Bohemian nobility. Moravia, and the other countries of the Bohemian crown, Silesia, Upper and Lower Lausitz, took a different legal view. Here, Ferdinand was accepted as king of Bohemia because of the hereditary rights of his wife Anna – as stipulated in the Treaties of Vienna signed in 1515. 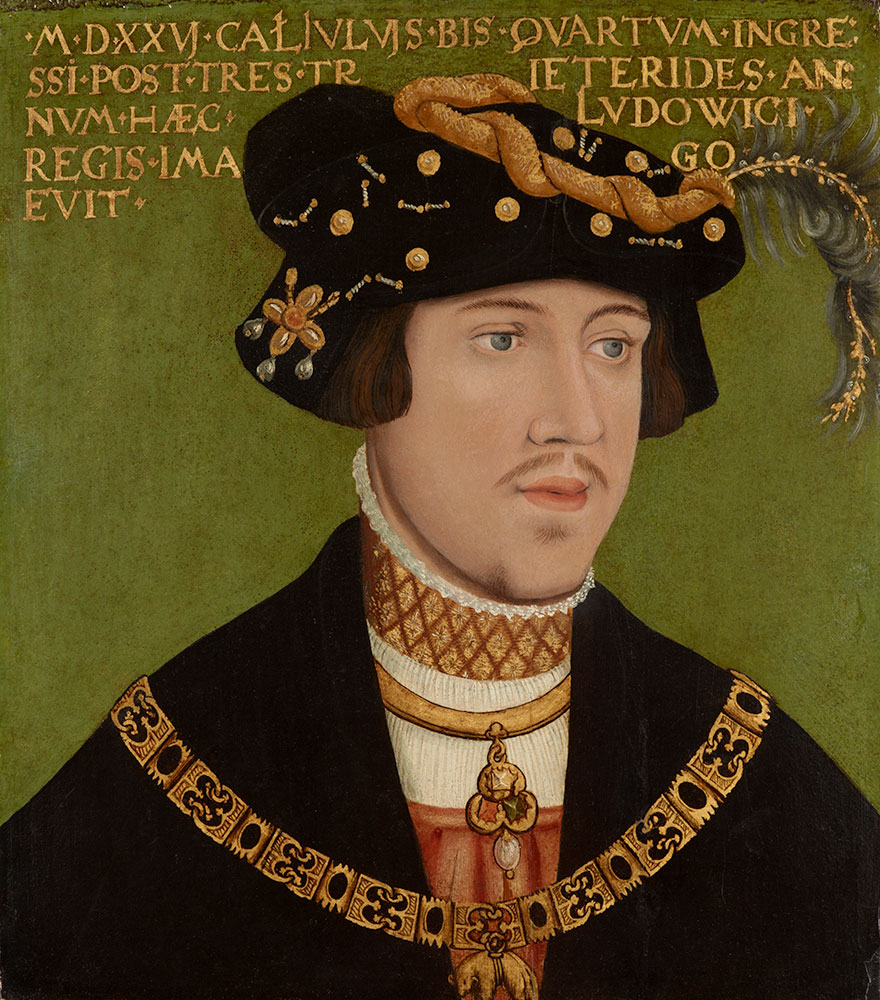 Zoom
Portrait of King Ludwig of Hungary and Bohemia

The Election of Archduke Ferdinand as King of Bohemia and Hungary 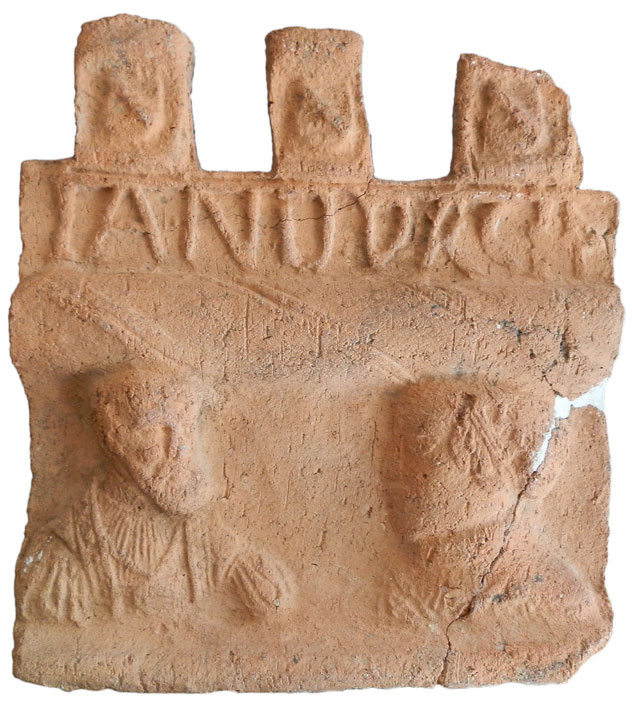 Zoom
Tile featuring the Portraits of Ferdinand and Anna

Following the death of King Ludwig II of Hungary in the Battle of Mohacs, Ferdinand claimed the crown of Bohemia and Hungary (as laid down in various family and peace treaties). Initially, acceding to the Hungarian throne was central to Ferdinand’s political aspirations. On October 23, 1526 he was unanimously elected King of Bohemia at Prague Castle, and on February 24, 1527 he was crowned there.

In Hungary, nationalists elected the Voivode of Transylvania, Johan Szápolyai/Zápolya, as King of Hungary on November 10, 1526. On November 10 Ludwig’s widow Maria summoned a Diet at Bratislava. This badly attended Diet elected Ferdinand as king on December 17 and declared the election of Szápolyai/Zápolya invalid for legal reasons (the Diet at Stuhlweißenburg/Székesfehérvár had not been summoned by the Palatine Istvá Bathory, the only man invested with the authority to do so). Ferdinand’s electors comprised only a fraction of the Hungarian magnates. The Croatian nobility elected Ferdinand at the Election Diet at Cetin (1527) as King of Croatia. On November 3, 1527 Ferdinand was crowned King of Hungary at Stuhlweißenburg/Székesfehérvá. 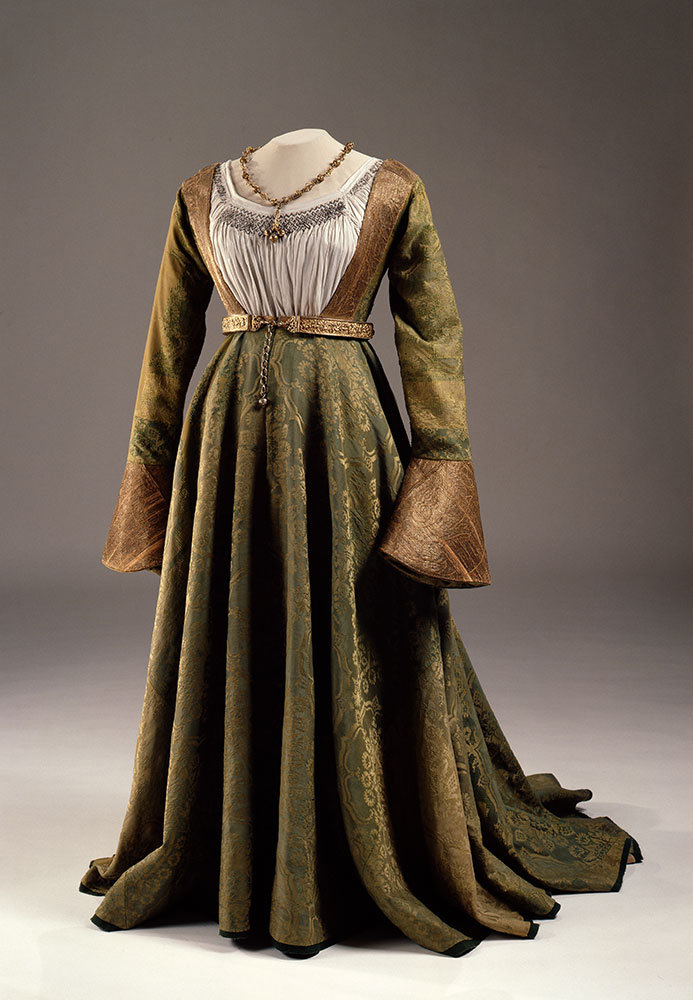 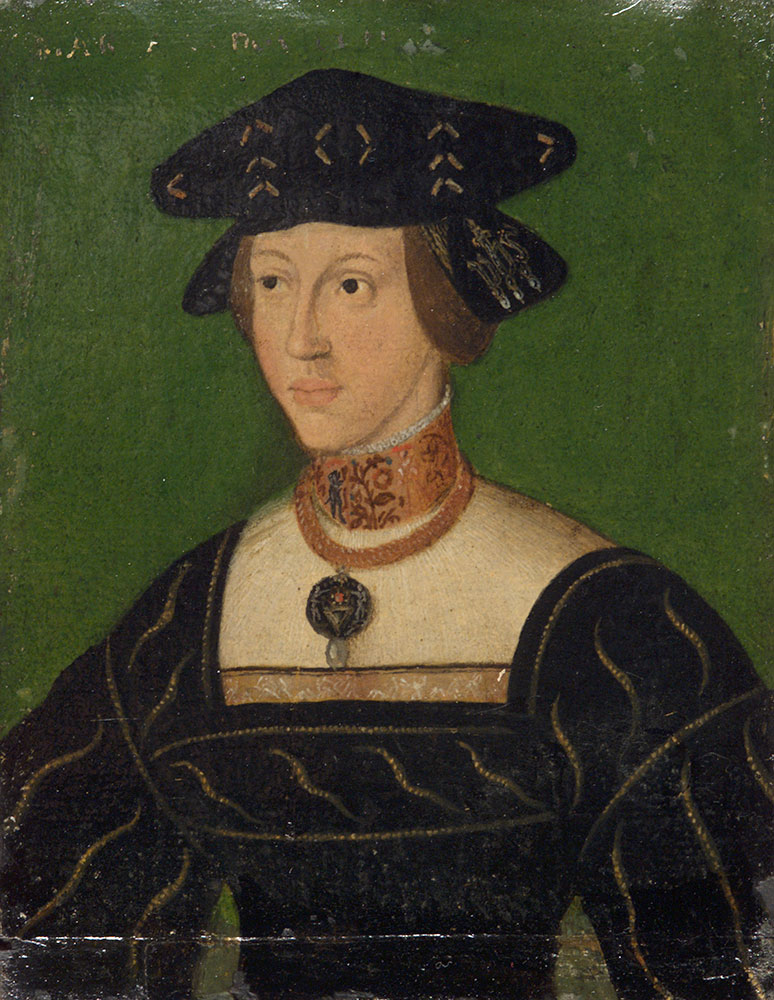 Zoom
Portrait of Queen Maria of Hungary and Bohemia

the Battle of Mohács – and the Fall of Belgrade

Sultan Suleiman ascended to the throne; the conquest of Egypt in 151 had greatly expanded the power of the Ottoman Empire. In 1520 he led his first campaign against Hungary. In July 1521 the Sultan’s army reached the fortress of Belgrade, then also known as the Greek White Castle (today the capital of Serbia). After conquering several castles around Šabac, an important strategic position south of the Danube, the Ottomans took Belgrade on August 29th after a four-week siege. The troops of King Ludwig II came too late to lend their support and defend the castle.

A possible Hungarian re-conquest was prevented by an outbreak of the Bubonic Plague in Hungary. This Ottomans conquest proved a major obstacle in Hungary’s southern defense system. Although the Hungarians claimed several victories over the Ottomans in the following years, including the Battle of Szávaszentdemeter (Sremska Mitrovica, Serbia) in 1523, they were never able to withstand or defeat an Ottoman army led by the sultan. In 1526, Suleiman started a new campaign against Hungary. 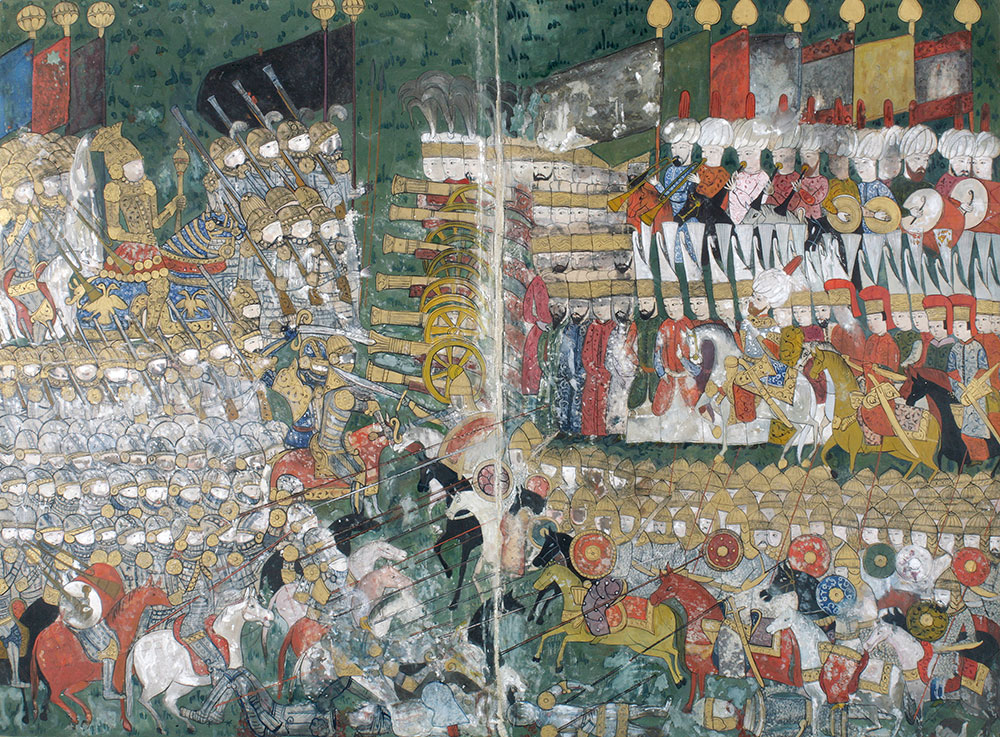 Zoom
The Battle of Mohács:

One after the other, he conquered Hungarian fortresses, among them the fortress of Pétervárad (Petrovaradin, Serbia), which had assumed Belgrade’s former central role in the defense system after 1521. The battle was fought near Mohács in Hungary, and, outnumbering the Hungarians three-to.one, the Ottomans won an important victory. Half of Hungary’s bishops, several magnates, numerous wealthy noblemen and King Ludwig II himself were killed. His death marked the end of the Bohemian-Hungarian branch of the Jagiellonian dynasty, and Hungary slipped into a civil war lasting fifteen years.

After defeating the Hungarian army at Mohács, Sultan Suleiman entered Ofen/Buda, burned the city to the ground and left. On his way home, his troops also pillaged central Hungary. The widow of King Ludwig, Maria of Hungary, had earlier fled to Bratislava/Preßburg. As Johann Szapolyai/Zápoya, Count of Zips and Woiwod of Transylvania, had not taken part in the Battle of Mohács, he was in possession of an army; he summoned a gathering of the eastern comitates of Hungary at Tokaj, where it was declared that a diet should be held in the old Hungarian coronation of Székesfehérvár/Stuhlweißenburg. This took place, and JohannSzapolyai/Zápolya was elected King of Hungary on November 10th, 1526, and crowned a few days later days. He then demanded the hand of Maria of Hungary in marriage but she refused, calling a diet at Székesfehérvár/Stuhlweißenburg to protect the interests of her brother, Archduke Ferdinand, who had already been already elected King of Bohemia on November 23rd, 1526. The estates assembled at Székesfehérvár/Stuhlweißenburg elected Ferdinand freely without regard for the succession treaties that guaranteed the Habsburgs’ right of succession. The Croatian Estates declared Archduke Ferdinand King of Hungary. The Slavonian states sided with Johann Szapolyai/Zapollya. Fruitless negotiations between the two parties continued, but the elected King Ferdinand started a campaign and in May 1527 he entered Ofen/Buda. After his troops had defeated the army of Johann Szapolyai/Zápolya at Tokaj on September 27th, 1527, the Habsburg prince was crowned King of Hungary on November 3rd at Székesfehérvár/Stuhlweißenburg. These double royal elections and coronations resulted in a drawn-out civil war, which lasted 15 years and engulfed a kingdom also threatened by the Ottoman advance. 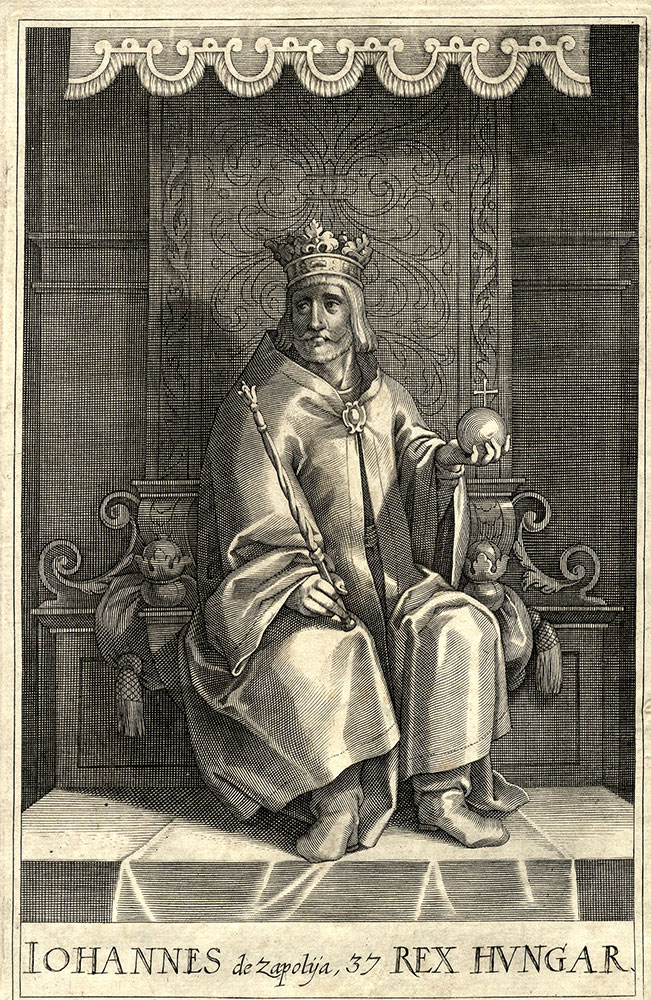