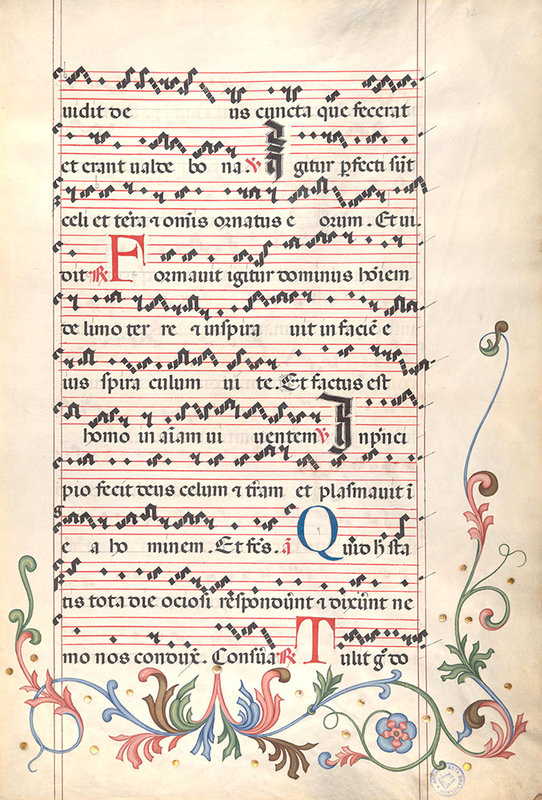 This Antiphonary was part of the collection of the Diocese Chapter in Bratislava. Some of the Chapter’s possessions, or temporale, were transferred to the Slovakian Republic Archive in the 1940s; others were preserved in Budapest, where they remain today. Seven of the illuminated initials are accompanied by decorations in the margins that feature elements characteristic of Renaissance illuminated manuscripts such as garlands, vases, and elaborate corners. Other parts of the illuminations, however, have been completed in the Gothic idiom typical of manuscripts produced in Bratislava from the late fifteenth century, which were strongly influenced by Viennese bookmaking. Elongated acanthus leaves, illustrations of birds, and strong color combinations are characteristic of Viennese style. Such features are especially typical for works produced in the workshop of Ulrich Schreier, active as an illustrator in Vienna and Salzburg, who completed commissions for the Slovakian Diocese Chapter. A second illuminator from Schreier’s workshop also contributed to this Antiphon. In the late fifteenth century clergymen (kanoniker) in Bratislava were professionally mobile and worked in the church administration of either Budin or Ostrihom, or more frequently in Lower Austria or Vienna. The confluence of styles in this Antiphonary, created at the turning point from Gothic to Renaissance style, is not surprising, considering both the heterogeneous backgrounds of two contributing illustrators and the fact that the Bratislava kanoniker were familiar with various styles popular in different regions.
Dušan Buran