The four decades between 1490 and 1530 were the most eventful in the history of the Kingdom of Hungary. After the death of King Matthias Corvinus, the Hungarian Estates chose Wladislav /Vladislav II Jagiello (r. 1490-1516) over his brother (Jan Albrecht I) and the Habsburg candidate (Maximilian I) to succeed Corvinus as King of Bohemia. Wladislav/Vladislav II’s reign was, however, quickly compared to “a ship on a stormy sea” by the Hungarian chancellery. He rewarded Hungarian magnates for his election by granting them far-reaching liberties and privileges. This weakened royal power and would have devastating consequences for the country.

The lowest point of Wladislav/Vladislav II’s rule was the bloody Peasant’s War of 1514. Weak centralized power also resulted in inadequate defenses against the Ottoman onslaught. At the beginning of the sixteenth century, the Ottoman Empire began systematically to conquer strategic border fortresses in southern Hungary. After the Ottomans took Belgrade in 1521, it became clear that Hungary’s central regions were vulnerable to enemy attacks. 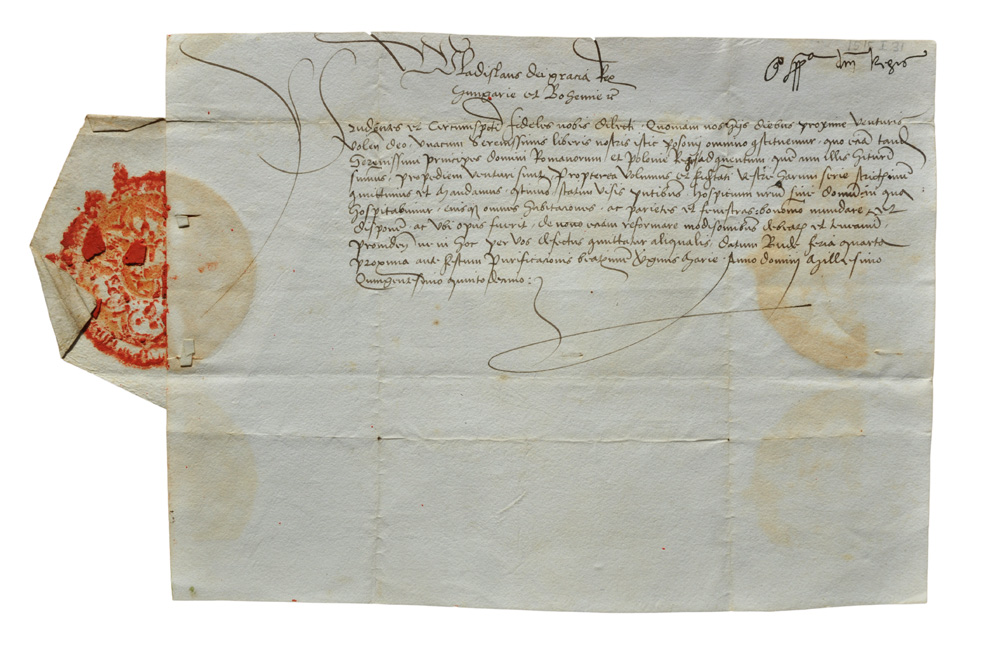 During the reign of Wladislav/Vladislav II, the Habsburgs increased their influence over Hungarian politics. Wladislav’s desire to secure the succession of his son and heir Ludwig facilitated the Habsburgs’ success. In return, the Habsburgs helped Hungary defend itself against the Ottomans. An inheritance treaty negotiated with Maximilian I in 1515 that arranged the wedding of Wladislav’s/Vladislav‘ s daughter Anna to Maximilian’s grandson, and Wladislav’s/Vladislav‘ s son Ludwig to Maria Habsburg, facilitated the rise of the House of Habsburg in Central Europe. In 1516, only a year after the conclusion of the treaty, Wladislav/Vladislav II died. His successor, Ludwig II, was declared of age in 1522 and succeeded to the Hungarian throne. The young and inexperienced king was unable to diminish the power of the strong magnates.

During the Jagiellonian reign, the regions comprising modern-day Slovakia were the most developed in the Kingdom of Hungary. In his Third Decree, Wladislav/Vladislav II listed the most important cities in Hungary, six of which are located in what is today Slovakia: Pressburg/Bratislava, Bartfeld/Bardejov, Kaschau/Kosice, Eperies/Presov, Tyrnau/Trnava, and Leutschau/Levoca. It is important to note that western Slovakia was home to a highly developed wine making industry, and that Pressburg was one of the leading exporters of wine in the Hungarian kingdom.

Interestingly, the seven great mining cities (Schemnit, Kremnitz, Neusohl, Königsberg, Pukkanz, Libethen, and Killn) were omitted from the Third Decree, despite the fact that they were much esteemed throughout Europe during this period. Thanks to rich deposits of copper, silver, and gold, these mining cities were extremely prosperous. Johannes Thurzo (1437-1508) made the most of this in his commercial and entrepreneurial activities. An able businessman who understood proper smelting techniques, Thurzo signed a contract at the end of the fifteenth century with the rich Augsburg banking family Fugger, a partnership that created the greatest mining enterprise in Europe at Neusohl. Because Thurzo had received a royal charter from the Hungarian king to mine ore in the seven mining cities, he could freely develop a trade network that stretched from Germany to locations overseas. It was noted at the time that “the wealth of the House of Fugger is based on golden Kremniz, silver Schemnitz, and copper Neusohl.” In 1526 Thurzo closed the enterprise, and the golden era of the Fugger-Thurzo partnership came to an end. 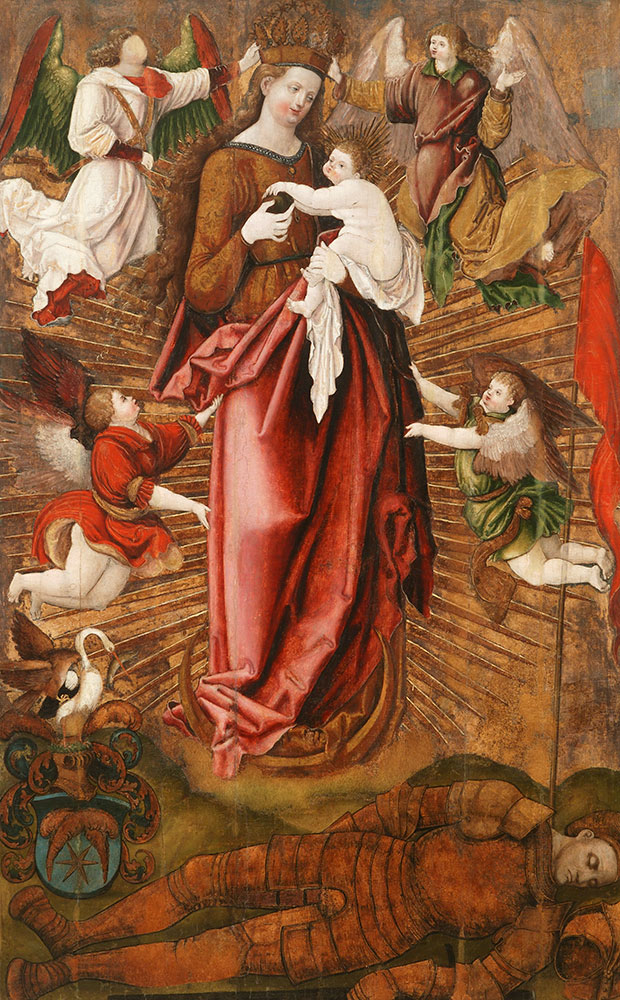 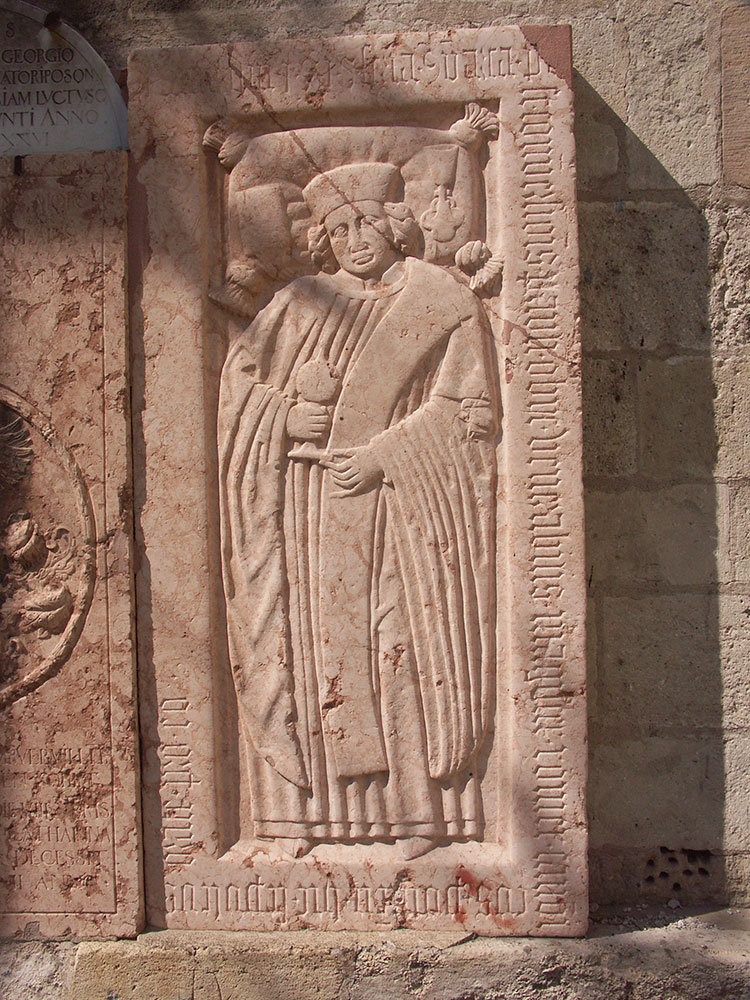 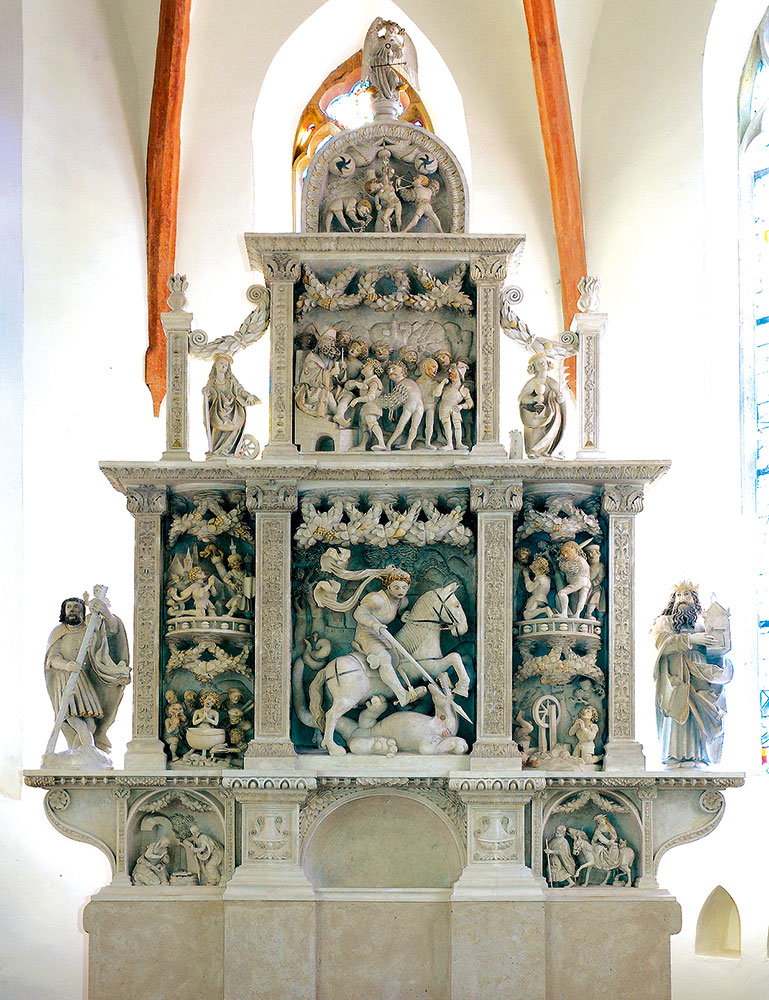 Zoom
Main Altar of the Church of St. George at (Svätý Jur) 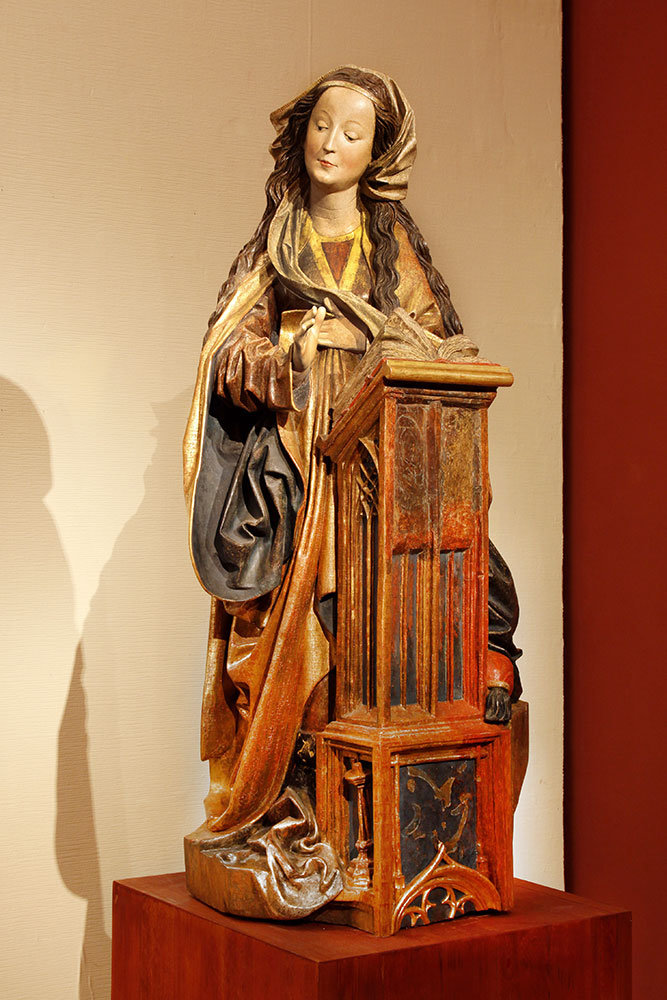 Zoom
Statue of the Virgin Mary from the Annunciation Group 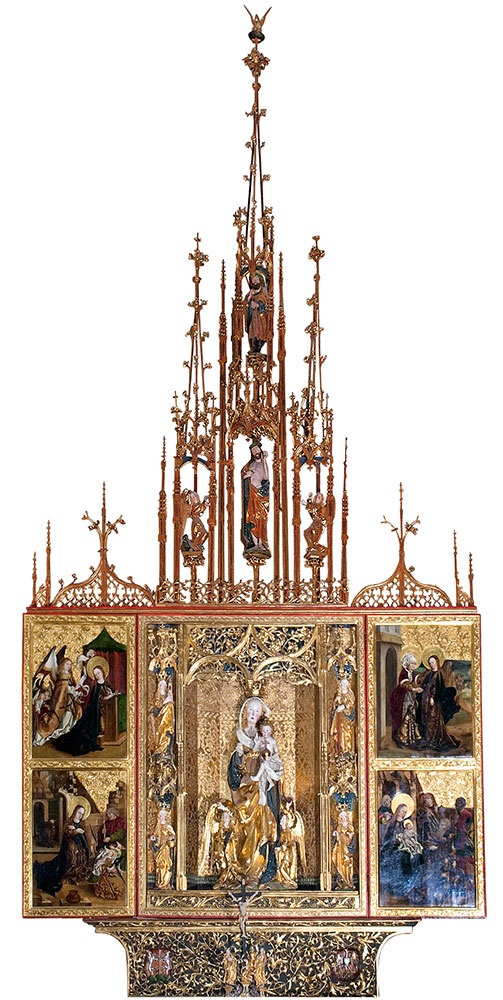 Zoom
Altar of the Virgin Mary

Johannes Thurzo was not only a very successful businessman, he was also a generous patron of the arts. With his financial support late Gothic art reached its apogee in these mining cities where artists could fully develop their talents. Master Paul von Leutschau was one of the most important wood carvers and sculptors of the late fifteenth century. His carved Gothic altarpiece in the church of St. Jacob’s is included on UNESCO’s list of cultural heritage.

The anonymous Master of the St. Catharine Altarpiece worked in Schemnitz, another mining city. His paintings decorated the main altar of St. Catherine’s church. The most important of these depicts the Visitation of Mary, now in the Hungarian National Gallery in Budapest.

It is important to emphasize that the Reformation quickly gained followers in Slovakia, primarily among the German-speaking middle class in both the free royal cities and mining centers. Followers of these new reformed churches lived at the royal court in Buda presided over by the highly educated Queen Maria Habsburg.

The defeat in the Battle of Mohács on August 29th 1526 marked a turning point not only in the history of the Hungarian Kingdom but also of Central Europe. The Kingdom of Hungary, which in the late Middle Ages had become the leading state in Central Europe, was transformed into a battleground fought over by two important great powers: the Ottoman Empire and the growing Habsburg Monarchy. For the following 150 years what is now modern-day Slovakia became the central area of the Kingdom of Hungary, which was divided into three parts.