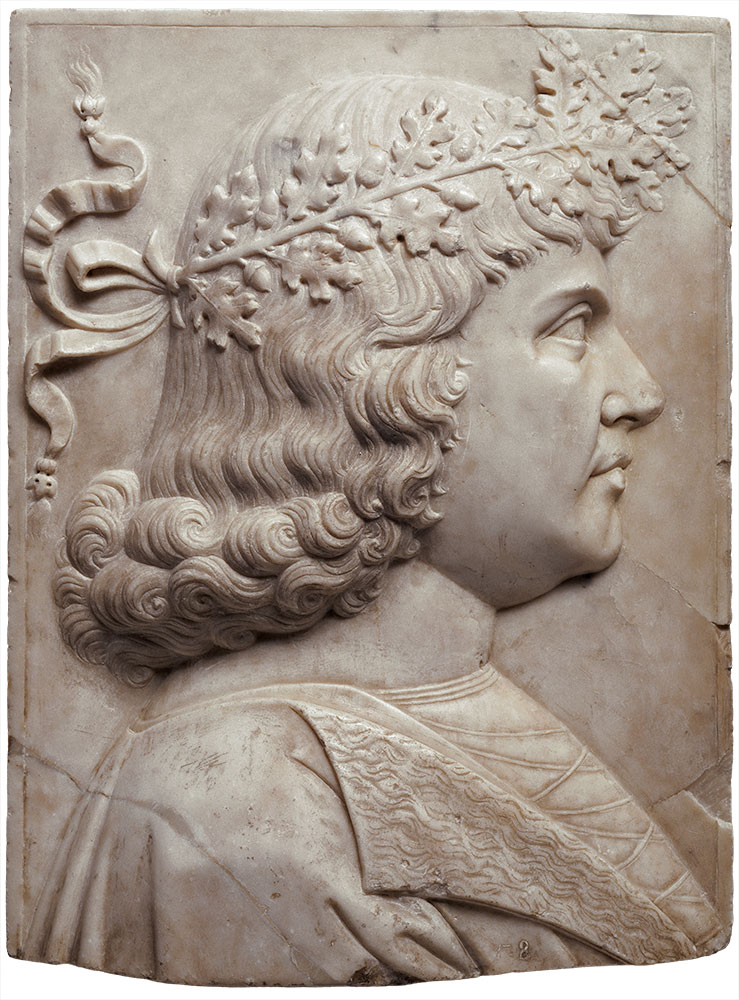 On April 6th, 1490 King Matthias Corvinus died in Vienna. Because he had no legal heir, the royal council called a diet at Buda on May 17th to elect a new king of Hungary. Although King Matthias had appointed his illegitimate son Johann Corvinus to the throne of the enlarged kingdom - which included Moravia, Silesia, Lusatia/Lausitz and the eastern part of the Austrian hereditary lands, the Hungarian estates quickly refused to elect him after the death of his father. The 17-year-old Duke Johann left Ofen/ Buda with the Hungarian crown; he was, however, defeated on September 3rd, 1490 by the combined troops of the Dowager Queen Beatrix and the magnates.

The most likely candidates were two Habsburg rulers, Emperor Frederic III, and his son the Roman King Maximilian, and two Jagiellonians, King Wladislav/ Vladislav of Bohemia and Duke Johann Albrecht of Poland, who dispatched messengers to Hungary. The Habsburgs based their claim to the throne (in large part) on the Treaty of Wiener Neustadt (1463), which supposedly guaranteed them the Hungarian throne after the death of Matthias Corvinus. The Jagiellonians based their claim on the fact that their maternal grandfather, King Albrecht II Habsburg, had been King of Hungary (1437-1439).

Zoom
Pillar with the monogram of King Wladislaw of red marble

In the end King Wladislav of Bohemia was elected King of Hungary on July 15th, and crowned at Székesfehérvár/ Stuhlweißenburg on September 19th. The new ruler began his reign in an impossible position. His brother, Duke Johann Albrecht, did not travel to Hungary; instead he conquered the northeastern part of Hungary and laid siege to Kaschau(Kosice/Kassa, Slovakia), the largest city in the region, in September 1490. In the meantime, King Maximilian recruited an army, taking Vienna and the other castles in Hungarian hands during August and September. At the beginning of October he crossed the border and advanced on Oven, the Hungarian capital. His troops conquered the coronation city of Székesfehérvár/Stuhlweißenburg, but his unpaid mercenaries revolted at Ofen/Buda, forcing him to leave the remaining parts of the army in the conquered Hungarian cities and return to Austria.

The following Christmas, 1590, the ambassadors of both parties concluded a peace treaty at Ungarisch Altenburg(Mosonmagyaróvár, Hungary), which lasted until the following St. George’s Day (April 23th, 1591). Afterwards King Wladislav/ Vladislav left to liberate Kaschau(Kosice/Kassa, Slovakia). Before the two Jagiellon brothers actually went to war, they settled their quarrel by concluding a peace treaty at Kaschau(Kosice/Kassa Slovakia) on February 20th, 1491, in which Duke Johann Albrecht-- gave up his claims to the Hungarian throne. This allowed King Wladislav/ Vladislav to turn his whole army against Maximilian. In July 1491, the Hungarians laid siege to Székesfehérvár (Stuhlweißenburg), retaking the city after six weeks on July 25th, 1491. Both this success and Maximilian’s continuing war in Brittany, opened the way for a peace treaty, which was concluded after long negotiations on November 7th, 1491 at Bratislava.

After the wars of succession and the internal quarrels during the first half of the 1490s – against the normal historical tradition - the reign of Wladislav/ Vladislav II in Bohemia (1471-1516) and in Hungary (1490-1516) was stable but not without problems. The king did not wage war against Christian countries because the growing Ottoman pressure along his southern border demanded a permanent military presence and his full attention; protecting his border castles and paying for a permanent army caused insurmountable financial problems. During most of the reign of Wladislav/ Vladislav there was peace between the Kingdom of Hungary and the Ottoman Empire, but along the border there were continuous incursions, fighting and sieges.

The border castles were able to repel attacks, and it was a dangerous sign when the Banat of Srebernik (today Srebernik, in Bosnia/Herzegovina) was lost in 1512. It inspired the king’s foremost chancellor, Johann Bakócz, to organize a crusade, but this campaign against the Ottomans turned into a peasants’ uprising. Another campaign led by the Woiewod of Transylvania, Johann Szapolyai/ Zápolya, also faltered. The Woiewod was defeated near Zsarnó (today Zarnov in Serbia).

Wladislav/ Vladislav II inherited a difficult political situation from his predecessor, Matthias Corvinus. The royal estates were small compared to the huge estates held by the baronial families. In the case of the Szapolyai/ Zápolya family, who had been raised by King Matthias from the lower nobility to the ranks of magnates, this created a problem that continued during the entire period. Wladislav/ Vladislav tried to balance the premeninence of the Szapolyai/Zápolyas by giving the huge fortune of Johann Corvinus, the son of King Matthias, to Markgraf/Margrave George of Brandenburg. The marriage of his brother King Sigismund of Poland to Barbara Szapolyai/Zápolya in 1512 also ensured the loyalty of the Szapolyai/Zapolya family.

In his final years the king, often ill after 1504, tried to secure the succession of his son. He organized Ludwig’s coronation of as King of Hungary and Bohemia, and created a new aristocracy that was loyal to the House of Jagiello. And from the old baronial families he recruited many lords for him and his son. Although Wladislav’s/ Vladislav’ s financial difficulties forced the king to maintain close relations with the Estates, the king and the royal court were (nevertheless) able to control the interior. 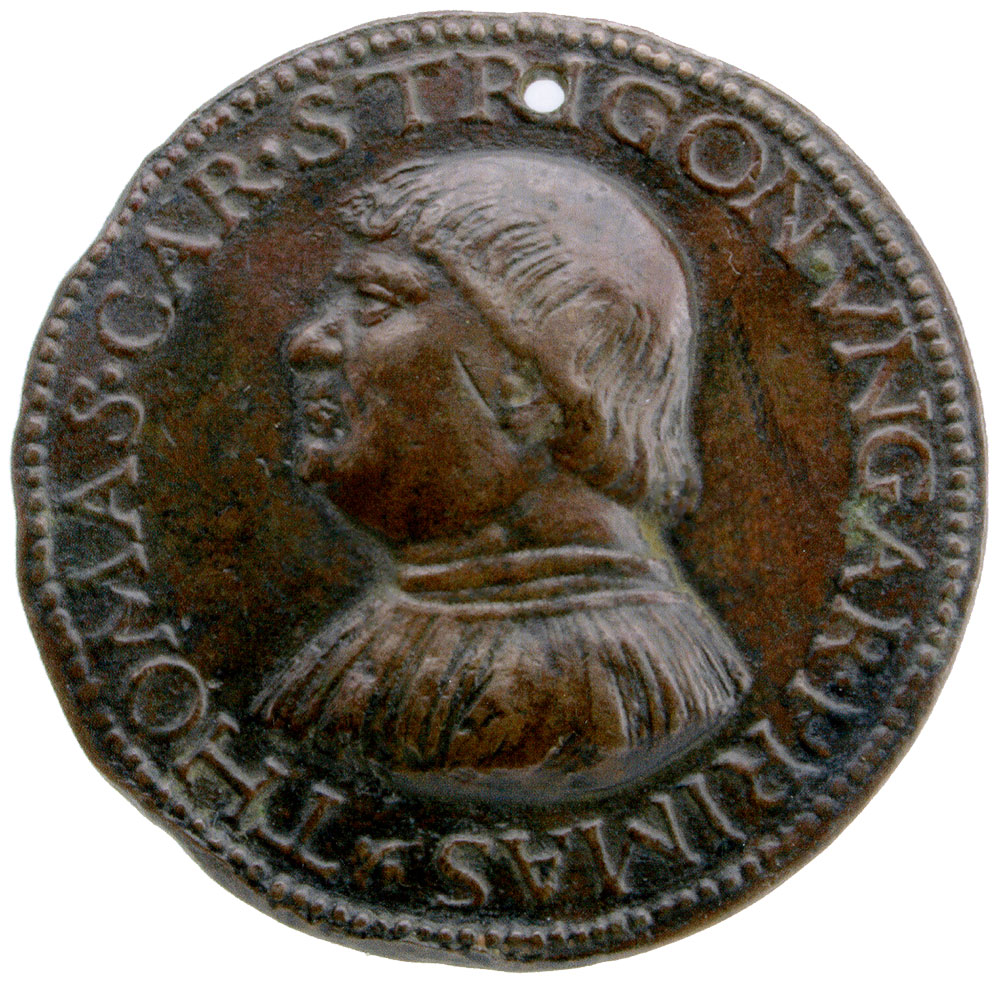 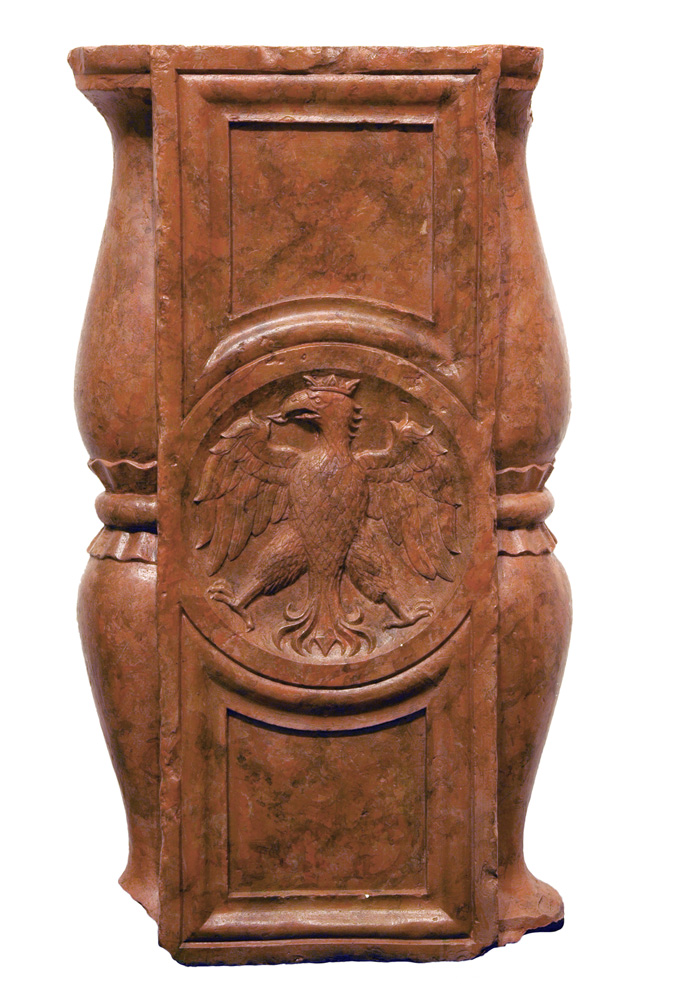 Zoom
Pillar with the coat of arms of the Jagiellon family

In 1530, Hungry had two kings. Both were elected legitimately, and crowned. Johann SzapolyaiZápolay was crowned with the holy crown of Hungary in November 1526, Ferdinand in November 1527. After his coronation Szapolyai/Zápolay assumed the name Johann I. contemporaries described the political situation following the Battle of Mohács as unruly. There was much fighting between the followers of the two kings. The nobility often changed allegiances. But this restive era cannot be seen as a single civil war. Although the Ottomans no longer posed a threat, they remained a military presence. The Comitat of Szerém on Hungary’s southern border (today’s Croatia and Serbia) was occupied by Turkish troops. In 1529 Sultan Suleiman’s army crossed the Hungarian border to lay siege to Vienna. At the same time, King Johann, with the help of the Sultan, conquered great parts of the country from Ferdinand. Thanks to the Treaty of Olomouc/Olmütz been signed by Matthias Corvinus and Wladislav/ Vladislav, he was also titular ruler of the other countries comprising the Bohemian realm - Moravia, Silesia, and Lusatia/Lausitz. But in reality, Ferdinand ruled these countries. According to Turkish historians, King Johann kissed the hand of Sultan Suleiman in the Sultan’s tent on the battlefield of Mohács. Suleiman’s representative, the Venetian Alviso Gritti joined the king’s government as treasurer. Ferdinand ruled only a small part of the kingdom as the Turks threatened both Croatia and Slovenia and the county’s western border. There were two parallel governments. The subjects of each king had their own diet.

In this conflict the Turks sided with King Johann. In the fall of 1530 negotiations between Ferdinand and Johann again resumed, and the war started again. As the ambassadors negotiated the peace at Posen(Poznan, Poland), helped by the mediation of King Sigismund of Poland and of Duke George of Saxony. In October 1530 Ferdinand’s general William of Rogendorf (Wilhelm), led an army of ten thousand men against Buda. He conquered Gran(Esztergom) and Vishegrád and laid siege to the capital for two months. The defenders of Buda were led by King Johann and Griti. In Rogendorf ‘s army comprised Hungarians, Germans, Austrians, Bohemians, and Spaniards. Buda was defended by Hungarians, Serbians and Turks.

An outbreak of the plague among his army and news of the imminent arrival of a Turkish relief army persuaded Rogendorf to lift the siege and retreat. King Johann appointed Gritti as governor. This appointment broke with tradition because the king was of age. In 1531 the royal parties negotiated an armistice. The country remained divided. Kings Ferdinand and Johann only concluded a peace in 1533 ,but the country did not enjoy peace for a long time. In 1541 Buda/Ofen and central Hungary were occupied by the Turks; Transylvania was turned into an Ottoman vassal state.