The oldest map of Hungary was produced by a clergyman called Lazarus. We know the circumstances of the creation only from the map’s description. The hand-drawn map was added by the Viennese professor Georg Tannstetter (Collimitius) and corrected and prepared for printing by Johannes Cuspinian; this served as the template for a woodcut produced by Peter Apianus, who organized its first printing in 1528 in Ingolstadt. Lazarus was the secretary of the Cardinal of Gran Thomas Barkócz, who in 1515 gave in marriage the royal couple. For a long time the map was believed lost, and was only known from a copy printed in 1553. In 1896, however, an antiquarian/antique dealer discovered the only extant example of the original map.

The map faces north – note the compass on the edge of the map. The north marked on the edge of the map diverges from north by 45 degrees) which resulted potentially in an error of the reworking. Because of this error, the Danube flows west to east, which was usual in medieval maps of the world. The text in German and Latin. The battlefield of Mohács is identified by a battle scene accompanied by the following description: “Hie bey dissin Kreutzlein ist Khünig Ludwig mit den seinen Soleymano magno dem zwelfftn turkischen Kayser erlegt wo denn anno 1526 die 29 Augusti.“Next to a cross is where the King Ludwig was killed by Suleiman the Great, the twelfth Turkish emperor, in the year 1526 on August 29th.” Note on the left edge of the map the Habsburgs’ Bohemian-Hungarian coat of arms and the Golden Fleece. 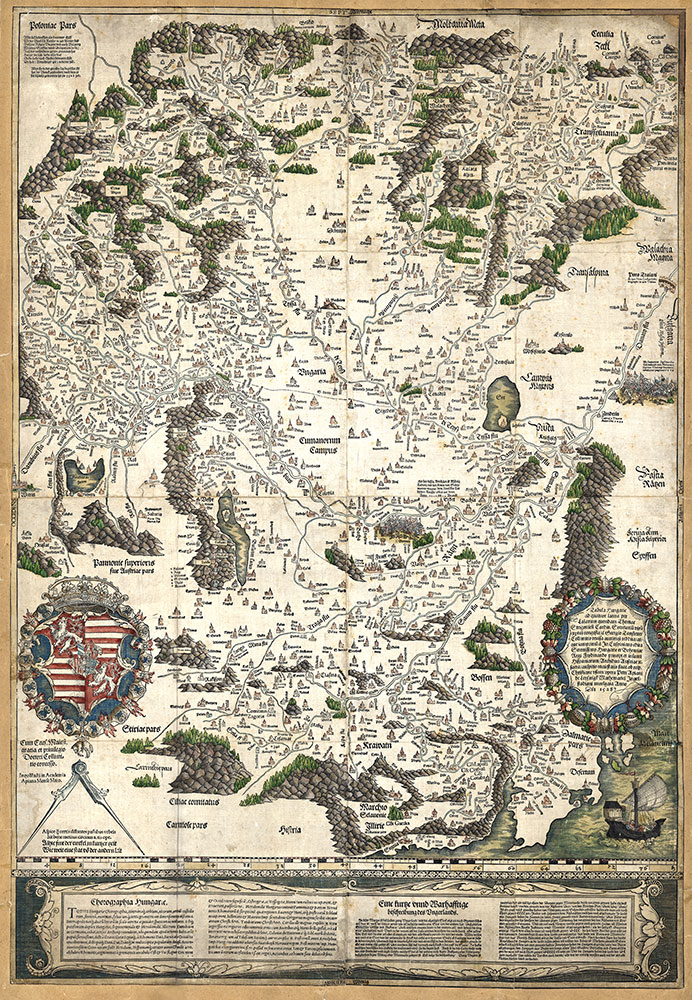