After the death of Duke Georg of Bavaria Landshut, a dispute broke out between the Palatine and Bavaria-Munich over who would inherit the lands formerly ruled by the Bavaria-Landshut branch of the family. On April 23, 1504 Maximilian sided with Duke Albrecht IV of Bavaria-Munich, taking military action against Count Ruprecht of the Palatine. The nine-month-long war over the Landshut succession saw Maximilian at the height of his power. At the Battle of Wenzenbach near Regensburg, fought on September 12, 1504, he led his army to victory and defeated three thousand entrenched Bohemian mercenaries. The siege of Kufstein Fortress was another important military success in the War of the Landshut Succession. Here, Maximilian’s use of heavy artillery proved decisive.

In the Cologne Arbitration Treaty, decided at the Court of Cologne on July 30, 1505, Bavaria-Munich was awarded a large tract of lower Bavaria, while Maximilian gained the area of Rattenberg, Kitzbühel, and Kufstein for Tyrol. 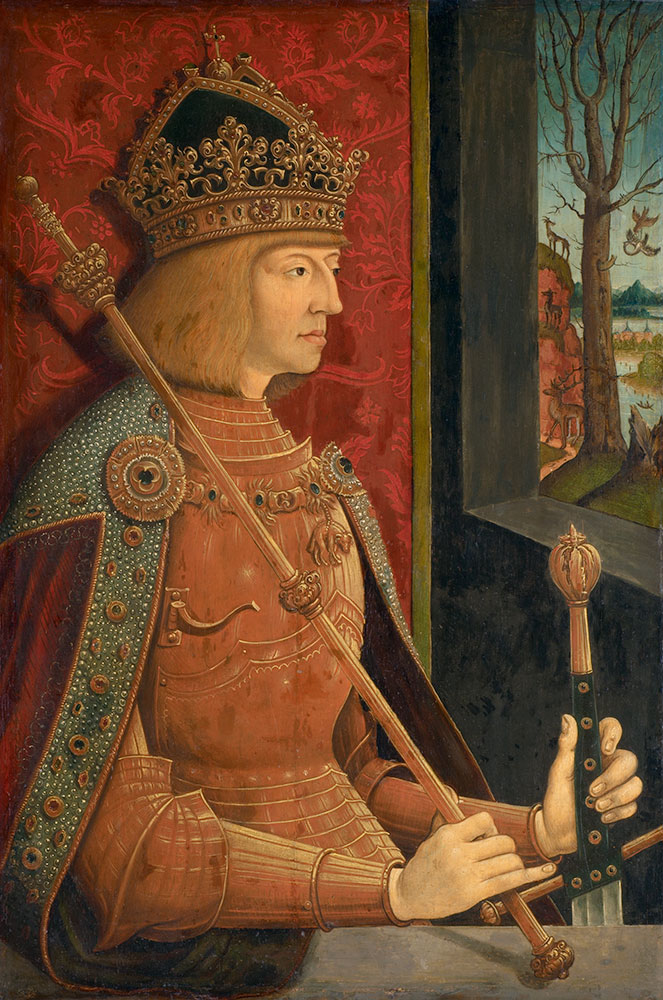 In January 1504, King Wladislav/Vladislav suffered a stroke, followed by two more strokes during 1504. His daughter, Anna, was only six months old and, as stipulated by the Peace Treaty of Bratislava, if he had died Maximilian would have succeeded him on the Hungarian throne. In 1505, two Diets were held in Hungary. The first began on February 23rd, the second on September 29th, St. Michael’s day. The first diet discussed the succession. The Szapolyai/Zápolya family tried to arrange a double wedding between the Jagiellonians and the house of Corvinius to strengthen their own claim to the throne. Eighteen-year-old Jan Szapolyai/Zápolya was to to marry the daughter of the king, and the latter’s brother George was betrothed to Elizabeth, the daughter of Johann Corvinius. In summer of 1505, the Prince Sigismund of Poland was betrothed to Barbara Szapolyai/Zápolya, the sister of the Szapolyai /Zápolya brothers. Wladislav, however, refused the proposal of Johann Z Szapolyai/Zápolya, and started to negotiate with Maximilian of Habsburg about a marriage between his daughter and one of Maximilian’s grandsons.

Maximilian asked the Imperial Diet for support for a Hungarian campaign to secure his hereditary rights, declaring war in September 1505. The Diet opened on St. Michael’s day brought together a great number of Hungarians. Johann Zápolya attended accompanied by two thousand armed riders. The meeting of the nobility took place at an unusual venue for a Hungarian diet, the field of Rákos, where the Rákos Decision was signed. Its author was the judge at the royal court, E. István Werböczy. The participants at the Diet declared that the reign of a foreign king would create the ruin of the land. They therefore agreed to elect a Hungarian king should Wladislav/ Vladislav die without a male heir. As Wladislav/ Vladislav did not agree to this decision it did not become law. But it played an important role in national consciousness; 1505 saw the birth of the idea of a national kingdom.

The Nihil Novi Law was passed under King Alexander Jagiello in 1505 by the Sejm (diet) in Radom. This law ended the first phase of the development of Noble Parliamentarism in Poland, which had begun in 1493. Since 1493 the representatives of the nobility elected to the Sejm, as well as the nobles elected to rural diets, had participated on a regular basis in the main diet.

The Nihil Novi Law stipulated that conclusions reached by the Sejm were only valid with the consent of all the three equal groups: the king; the senate (formerly the royal council); and the representatives of the nobility. Thus, the gentry came to exercise greater influence throughout the country because nothing new (“nihil novi”) could be decided without their consent.
Nihil Novi became the foundation of the constitution that turned Poland into a noble republic in the early modern period.